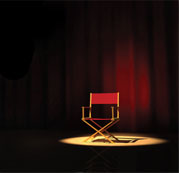 Come talk to the Producer of STAR TREK, STAR WARS, and LOST!