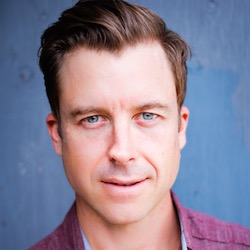 Lucas Near-Verbrugghe appeared on Broadway in Bloody Blood Andrew Jackson and The Ritz.  Other New York credits include Love Labour’s Lost and Macbeth (The Public), Permission (MCC), The Common Pursuit  (Roundabout), Leslye Hedland’s Assistance (Playwrights Horizons) and the world premieres of boom at Ars Nova and Bekah Brunstetter’s Oohrah! at the Atlantic.  Los Angles theater credits include Icebergs (Geffen), Seminar (Ahmanson) and Need to Know (Rogue Machine). Film credits include Our Idiot Brother, A Birder’s Guide to Everything, The Bad Guys, Lazy Eye and A Woman, A Part, Point and Shoot (short), and Lunch Break (short).  On the small screen he has appeared in Grimm, Law and Order, Law and Order SVU, and the upcomingTen Days in the Valley and Splitting Up Together, both on ABC.  You may have seen him as part of various web collaborations with The Kloons, as well as the web series’ The Wallflowers and The Chances (OutFest Audience Award).  Lucas has an MFA from NYU.